Training Assets Gateway - an eLearning assets library 1009 Understanding the ADA is an arduous task. That's why you have an HR and/or Legal Department. But there are some things a manager should know. Here is a case study about the ADA that you can use in an upcoming ADA training session. 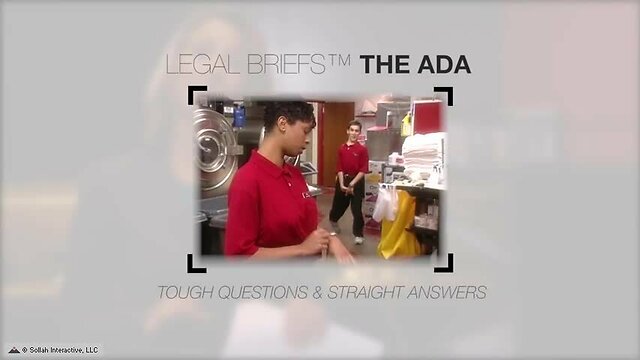 Sally has become a real problem. She is a customer service representative (CSR) at the call center you manage for a bank. For the first nine months of Sally’s employment, everything was fine. Then, things changed. For the past year, it’s been one thing after another.

Sally’s problem is that she is allergic to all kinds of smells. Her first complaints were about co-workers’ perfumes causing her to feel nauseous and have allergy-like symptoms. You allowed her to move away from co-workers with offensive perfumes three times, until you realized Sally would continue to have these problems no matter where she sat. You allowed Sally to have a fan at her desk. You even allowed Sally to communicate with her supervisor only by phone, because the supervisor’s perfume bothered Sally so much, but you refused to grant Sally’s request to “sniff” new employees who were to be stationed next to her cubicle!

Then Sally went to a doctor, who said Sally had “toxic encephalopathy.” He said she had to avoid scented hand cream, deodorant, cleaning chemicals, white-out, plug-in room deodorizers, carbonless paper, felt tip markers, hair relaxers and even some kinds of carpeting.

Sally continued to have allergic reactions at work. One day, she had to leave a training session because of the lemon-scented furniture polish that had been used on the training table. You had to reschedule a special session for her. When Sally was training a new CSR, she asked the trainee to stop wearing perfume and hand lotion. You reassigned the trainee to someone else and gave Sally two weeks of paid leave to recover. You even allowed Sally to wear a charcoal mask around the office.

Sally didn’t think you were doing enough, so she filed a complaint with the EEOC.

After all you’d done, she accused you of discriminating against her by not accommodating her disability.

Two months after filing the complaint, Sally asked for a meeting with you and her supervisor. In the meeting, Sally yelled at you and accused you of “poisoning” her through the air ventilation system. She demanded that you either establish a “fragrance-free” policy or give her an enclosed cubicle equipped with a special air filtration device. You were incensed by Sally’s behavior. You told her the meeting was over and said, “I know that you’re taking the legal route, so you probably just want to continue in that vein.”

Two weeks after the heated meeting with Sally, you fire her for being insubordinate with you in that meeting. You tell Sally the bank cannot work out its relationship with her. Sally asks if she is being fired because of her disability. You tell her no because the bank’s attorneys say she does not have a disability.

Q: Was Sally “disabled” under the ADA?

A: Deciding whether an employee is truly “disabled” under the ADA requires an employer to come to a legal conclusion after an individualized consideration of the employee’s impairment and how it impacts him or her. Supervisors and managers are rarely equipped to make such an assessment or render such a determination—and neither are employees. But Sally did not have to know whether her condition legally qualified as an ADA “disability” in order to assert ADA rights. She only had to have a good faith belief that she was disabled in order to request accommodations and file an EEOC complaint for disability discrimination.

Q: Is the bank required to make accommodations for Sally if she isn’t “disabled” under the ADA?

A. Technically, no. However, employers will want to take reasonable measures to help employees succeed at their jobs rather than withholding any assistance because of a belief that the employee is not “disabled.” Employers do not admit that an employee is “disabled” by providing accommodations for persons who do not meet this technical ADA definition.

Q: Was the bank justified in firing Sally as it did?

A: Probably not. The ADA protected Sally from retaliation after she had filed a complaint. A single incident of “insubordination” in a meeting may appear to be a pretext for retaliation—especially if others have not been fired for similar conduct.

Discrimination laws protect a person’s right to make a complaint in good faith, regardless of whether that complaint ultimately prevails. It is crucial to remember that retaliation complaints are viable even when the underlying charge of discrimination is not upheld.

Q: What did Sally’s manager do wrong?

A: There was ample evidence that Sally’s manager retaliated against her because she had filed an EEOC complaint against the company.

Together, these facts infer that the manager was tired of Sally’s special requests and that the filing of the EEOC complaint was the last straw. While Sally’s behavior at the confrontational meeting might have also contributed to her termination, it was just as likely that a retaliatory motive was at work too.

Questions, Comments or Need Help, let us know! Email us at clientservices@sollah.com.